The Wisdom of Perspective

“Where you stand depends on where you sit.”
-Miles’s law*

It’s been more than 40 years since I first heard these words. It was a warm summer day in Syracuse, New York, and I was sitting in a large auditorium on the first day of my master’s program at the Maxwell School of Citizenship and Public Administration. Honestly, I don’t remember much more than feeling excited about the challenge that lay ahead. But I do remember being struck by this brief aphorism and the wisdom of its underlying message: Beware of your own certainty; know that others will have equally valid perspectives; and any path forward will demand curiosity, conversation, and compromise.

That message has stood the test of time, from my early stint in local government to my subsequent years as a corporate HR professional, doctoral student, and entrepreneur. In fact, during my lengthy career in leadership and change, the imperative to seek out and listen to multiple perspectives has been a foundation of my practice.

Today, as I contemplate how a globalized world has transformed our societies and organizations — generating both progress and an ever-emerging array of problems — Miles’s

What we think, how we act, and what we ultimately produce are informed by our beliefs — by where “we sit.” Once we understand this, we’re able to exchange views, learn from one another, and find a way forward. But if we fail to recognize the viewpoints of others, we devolve into polarized all-or-nothing thinking. Like Tolkien’s Gollum, caressing his “precious ring,” we retreat to our righteous corners, holding tight to our cherished convictions.

What can we do about this?

I agree with educator Richard Rohr (2017), who says we need to teach people how to move from win-lose to win-win ways of thinking. Over the past several years, my colleagues and I have

experimented with a number of approaches and have found metaphors to be among the most powerful educational tools. Why? Because metaphors, whether they’re pictures, symbols, or words, have the power to convey a whole constellation of values and beliefs. They tell a story and bring new awareness of other perspectives. And in so doing, metaphors can open up new ways of being and acting in the world.

The best way to illustrate this is to introduce some of the classic metaphors that inform our understanding of the organization, one of the most basic forms of collective human behavior. In this newsletter, I begin the journey by describing two archetypal metaphors that dominated the industrial world in the early 20th century. These metaphors are rooted in opposing worldviews that lead to fundamentally different ways of approaching organizational change.
The story begins with the machine . . .

The Machine Metaphor: An Age-old Archive of Beliefs

It’s widely accepted that the oldest and most durable metaphor for the organization is the machine. This worldview assumes that organizations are rational and can be optimized, and that change can be predicted, planned, quantified, and controlled. Notably, this approach mirrors the scientific method, which sees nature as something that can be managed and even dominated. In the late 19th century, Frederick Taylor made these “scientific” ideals the central tenet of classical management theory, which includes mechanistic concepts like standardization, efficiency, hierarchy, and task specialization. 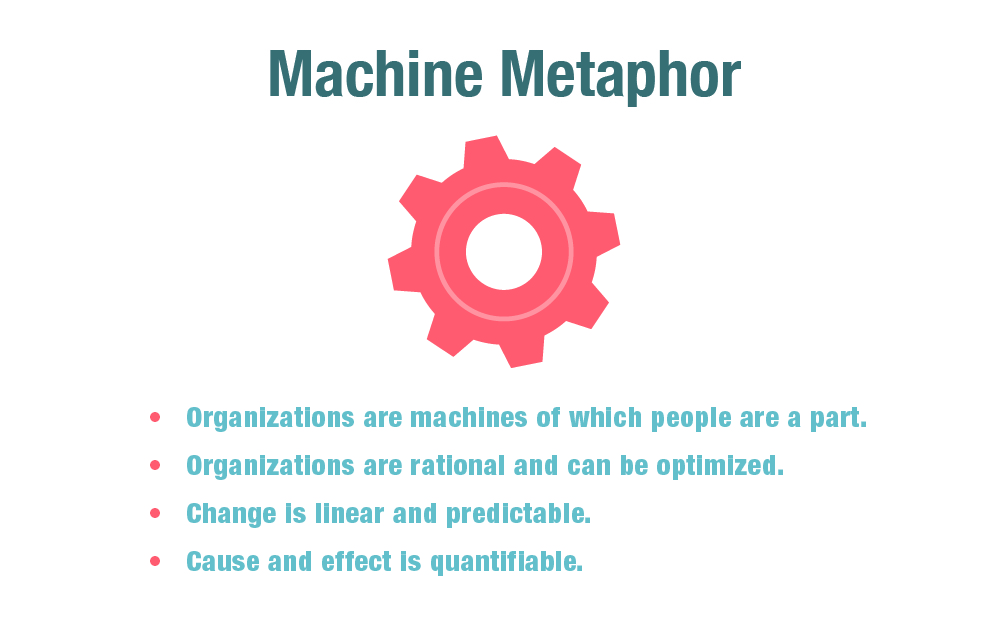 Why does the machine metaphor have such enduring power? Because the idea of the machine rests on a vast archive of beliefs, principles, and ideals that developed over centuries. It began with the Scientific Revolution of the 17th century and the Enlightenment of the 18th century, when philosophers broke with Church doctrine, arguing that the human mind — not God — was the source of knowledge and order. This profoundly radical idea, coupled with an unshakable faith in rational thought, produced a succession of revolutionary technological and social innovations that have shaped modern life.

According to late Czech president and philosopher Vaclav Havel (1992), “the culminating belief” of the Western modern era was “that the world . . . is a wholly knowable system governed by a

finite number of universal laws that man can grasp and rationally direct for his own benefit.” No one exemplified this more than Isaac Newton, who saw our universe as a closed mechanical system — a machine if you will — where all phenomena could be observed, quantified, and measured. Havel insisted we still operate as if the world is “a machine with instructions for use waiting to be discovered,” a point he continued to argue until his death in 2011.

It’s not hard to see why the machine metaphor has played a powerful role in business. For centuries, industrialized societies, benefitting from an array of new technologies, have needed no help recognizing the relationship between those technologies and progress: “It is the obviousness and simplicity of the machine as a symbol of progress that accounts for its astonishing power. . . . They [could] see it, hear it, and, in a manner of speaking, feel it” (Marx, 1964, pp. 192-193). Take one look at today’s booming tech industries, and it’s clear that this statement still holds true.

Furthermore, the machine is inextricably linked to markets and competition. In fact the whole idea of Adam Smith’s “invisible hand” is essentially mechanistic. As Jonathan Sacks explains in his 2003 book, The Dignity of Difference, Smith envisioned a social order that could create economic prosperity from the “seemingly disconnected decisions of millions of people, each pursuing his or her own advantage” (pp. 144-145). The chief mechanism for this transformation was the market, driven by competition — a tool so powerful that it “harnesses private energies and turns them to public benefit” (p. 144). Arguably, over time, this worldview has become a taken-for-granted “truth” that continues to drive business and global change.
For these and many other reasons, the machine metaphor has played a sustained and formidable role in determining how we understand and manage business. And yet — inevitably — new perspectives have emerged to challenge its primacy.

At the dawn of the 20th century, business organizations mirrored both the upsides and the downsides of the machine. On the one hand, business boomed, fueled by ongoing technological advances and innovations in scientific management, among them the assembly line. On the other, as Sacks says, the invisible hand “is not always benign” (p. 111). Workplaces were often brutal and dehumanizing, giving rise to muckrakers, Marxists, and other reformers.

Clearly it was time for some fresh thinking. 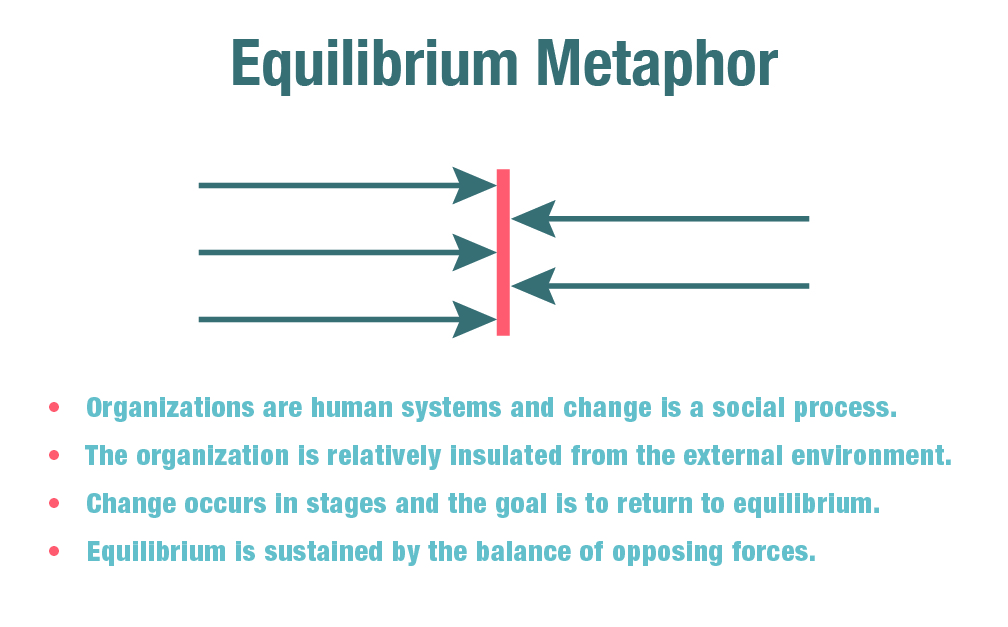 Fortunately a team of researchers conducting a series of experiments in Western Electric’s Hawthorne factory during the 1920s and 1930s made an accidental discovery that transformed our understanding of organizations. Led by sociologist Elton Mayo, the studies initially focused on whether enhanced lighting and other physical conditions would impact workers’ productivity. Instead they found that workers responded to social factors, specifically the experience of having their managers show interest in their work. Mayo’s team had stumbled on a new concept: “social organization,” the revolutionary idea that organizations are essentially human systems, comprised of meaning-making human beings, and that change must be understood within that context(Vaill, 2008, p. 219).

It’s hard to overstate the importance of this idea. Vaill writes that one of the first to grasp that importance was Kurt Lewin, who argued that motivation, collaboration, and performance arise, not from “rationalistic design,” but from “social process” or the “live operation of conscious human beings” (pp. 220-222). Building on this insight, Lewin and his contemporaries laid the foundation for the nascent field of organization development.

The equilibrium metaphor is based on Lewin’s theory of change. Lewin’s premise was that organizations naturally seek a state of equilibrium. He famously described organizational

change as a process of unfreezing, changing, and refreezing. He theorized that “equilibrium is sustained by a balance of opposing forces,” and developed the force field analysis tool to identify and manage the “driving” and “restraining” forces (represented by opposing arrows) in a change initiative (Evans & Thach, 2000, p. 54).

From this perspective, the change agent’s priority is to help the organization adapt so that it can return to a steady state of equilibrium. Arguably this metaphor assumes that organizations are relatively static, reflecting the comparatively slow pace of change in the early part of the 20th century. But the metaphor also captures the undiminished human need for certainty, and recognizes the need to harness, rather than resist, the power of social process. That’s why the equilibrium model is still reflected in many contemporary approaches to change, among them William Bridge’s (2003) well-known and -loved transitions model.

Mechanistic vs. Humanistic: The Story Continues in Part 2

By the middle of the 20th century, the equilibrium metaphor was well established. But that doesn’t mean we’d seen the last of the machine metaphor. Worldviews are remarkably resilient. Instead these two opposing metaphors — mechanistic and humanistic — persisted, living side by side in the collective imagination.

In Part 2 I’ll pick up this thread, describing two new metaphors for organizations that have

emerged over the past several decades. These new metaphors bring new insights, but also echo the fundamental polarity between the machine and human systems. In the end, I’ll argue, the role of the change agent is not to choose among competing worldviews but to appreciate the vibrant tension they create that continues to shape organizational change.

I look forward to continuing the journey with you in the near future!

______________________
* Miles’s law was coined in 1948 by Rufus E. Miles Jr., an administrator at the Bureau of the Budget (later, the Office of Management and Budget). It’s interesting to note that the expression derives from public administration during a time when organizations were fast becoming more complex. It was just as useful when it was introduced to me in the tumultuous 1970s. If anything, it’s even more relevant in today’s chaotic world.

Evans, J., & Thach, L. (2000, October). Towards the next generation change model: An exploration of change models as they relate to organizational complexity and dynamics. OD Practitioner, 32(4), 53-59.

Havel, V. (1992, February 4). The end of the modern era. Address to the World Economic Forum, Davos, Switzerland. Retrieved from http://www.nytimes.com/1992/03/01/opinion/the-end-of-the-modern-era.html

Marx, L. (1964). The machine in the garden: Technology and the pastoral ideal in America. New York: Oxford University Press.

Rohr, R. (2017, April 13). Living in deep time. On Being podcast. Retrieved from https://onbeing.org/programs/richard-rohr-living-in-deep-time-apr2017/

Sacks, J. (2003). The dignity of difference: How to avoid the clash of civilizations. London: Continuum.