I’m a very organized person. I love to plan, whether it’s a monthly budget, a summer vacation, a meeting agenda, or my to-do list for tomorrow. Most days my penchant for planning is useful — it helps me be efficient, responsible, and reliable. But some days it feels like an addiction. It’s on those days that I glimpse the pernicious hope that drives my behavior: If I just work hard enough and plan carefully enough, there will be no unforeseen consequences, no uncertainty, no worry, no pain. 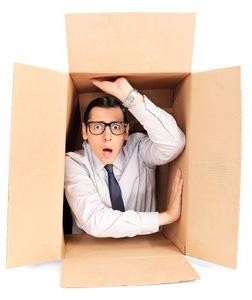 I offer this story as a metaphor for modern organizations. Those organizations are designed to maximize efficiency and minimize uncertainty. The central premise harks back to Frederick Winslow Taylor’s scientific management, the belief that managers utilizing quantifiable (“scientific”) methods should regulate every aspect of work life, from the selection and training of employees to the performance of tasks. As Barbara Crosby and John Bryson (2005) argue, this singular notion of the “in-charge organization” continues as the “enduring ‘ideal'” for most managers and organizations (p. 4).

The problem: In its quest for predictability, the 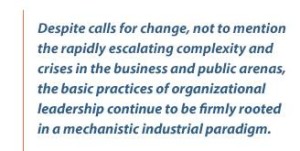 in-charge organization expands bureaucratic structures and planning processes designed to anticipate and solve problems, minimize uncertainty, and mitigate disruption. Under stress, these tendencies are heightened, creating a hyperfocus  that destroys the well-being and creativity of the system. And yet, despite calls for change, not to mention the rapidly escalating complexity and crises in the business and public arenas, the basic practices of organizational leadership continue to be firmly rooted in a mechanistic industrial paradigm.

Are there alternatives that are better suited to the challenges of the 21st century?

The Case for Self-Organization

People seem perfectly capable of managing their personal lives without supervision. Why, then, do we assume they need to be managed at work?

Think about your last day off. You probably made all kinds of decisions and accomplished all kinds of tasks you assigned to yourself. You may even have found room for fun with family or friends, activities that replenish your well-being.

If you step back and consider your nonwork life in the broader context of your networks of family and friends, you will notice constant activity that flows in an organic, emergent, and synchronous way. In today’s parlance, this way of operating is called self-organization.

To see how self-organization works, take a look at this video of a busy intersection in Hanoi:

No traffic lights, no stop signs. Yet pedestrians and drivers get where they’re going in an orderly, even rhythmic, way.

How does this flow of traffic relate to our formal organizations? Self-organization is best understood in the context of complex adaptive systems, a term used to describe the informal “neural-like networks” that exist side by side with formal organizational hierarchies (Uhl-Bien, Marion, & McKelvey, 2007, p. 299). As the video shows, self-organization is a process of continuous adaptation to unpredictable changes in the environment. It manifests in the form of emerging patterns and structures that can be fostered and shaped (as opposed to top-down, planning and control oriented approaches). Change, then, can occur at any level of the organization and spread throughout the system.

Why is this important? As legendary systems thinker Donella Meadows explains, “The most stunning thing living systems can do is to change themselves utterly by creating whole new structures and behaviors” (1999, p. 14). In fact, she continues, the “ability to self-organize is the strongest form of systems resilience” because it activates the system’s capacity to evolve and thrive (p. 15).

Self-organization does not do away with hierarchy, but it does assign leaders a more facilitative role. That means that leaders must understand how to create the conditions that foster effective self-organization. Three factors are particularly important:

From Control to Conversation: A Performance Feedback Example

Is self-organization a panacea? Goodness, no. And I’m not arguing that we abandon bureaucratic models in favor of chaos. But organizations can benefit from softening their focus on formal structures and learning to value and enable the system’s natural self-organizing capabilities.

One of the hallmarks of the in-charge organization is the formal performance management system. As Dave Ulrich, the grand pooh-bah of HR strategy during the late 20th century, proclaimed, “Without doubt, incentives change behavior. Inevitably, people do what they are rewarded for and leaders get what they reward, but not always what they expect.” For that reason, Ulrich argued, it’s important to establish a “system” that measures only “what can be controlled” in order to “reliably link performance [expectations] to rewards” (Ulrich and Brockbank, 2005, pp. 110 and 112).

Notice the striking similarity between Ulrich’s argument and these words written by Fredrick Taylor more than a century ago: “It is only through enforced standardization of methods, enforced adoption of the best implements and working conditions, and enforced cooperation that this faster work can be assured. And the duty of enforcing the adoption of standards and enforcing this cooperation rests with the management alone” (1911/2013, p. 36).

Because these “truths” are rarely questioned, most organizations have implemented performance management systems that each year set measurable goals, provide structured feedback, and allocate financial rewards based on performance outcomes. Key to the process is the annual ritual of rating individual performance on a 5-point scale that has been “force ranked” to ensure a symmetrical distribution (a bell curve) of poor, average, and exemplary employees.

When I think of performance management, I think of “The Emperor’s New Clothes.” Like

the villagers who pretend the emperor is wearing fine robes, we pretend that performance management is working. In truth, when I was an HR professional working within organizations, I found the process ludicrous and demeaning. I deeply resented the practice of reducing my year’s hard work to a “number” and felt even worse when I had to do the same to members of my team.

Today, as a consultant, I’m happy to see many of my client organizations rethinking the utility of their metrics-based performance management systems. This shift is being accelerated by recent research indicating that numerical rankings actually trigger anxiety, frustration, risk avoidance, and unproductive competition, thereby “damag[ing] the performance they are intended to improve” (Rock, Davis, & Jones, 2014, p. 2).

But as they move away from conventional approaches, organizations are faced with a new problem: What should they use in place of performance management?

Several years ago, I had the opportunity to explore this question with a farsighted CEO and the head of HR for a small health care services organization. The CEO wanted to implement a performance management process that would help to create a “culture of courage.” Instead of metrics and rankings, we taught supervisors, managers, and line employees to engage in meaningful coaching and feedback conversations. Within a short time, and without any additional consulting, a more open and direct culture began to emerge.

Today, many companies are dropping their mechanistic performance management systems and exp

erimenting with conversational approaches to performance feedback. As Olson and Eoyang (2001) explain, instead of starting with predetermined expectations, effective performance conversations allow goals to “emerge from the interaction” and provide opportunities for ongoing reciprocal feedback between manager and employee (p. 122).

My point: Self-organization can be generated by open and honest conversations, what Olson and Eoyang (2001) describe as “a dance in which agents shift continuously in concert with an ever-changing environment” (p. 118).

Control is the primary currency of the in-charge organization. Although decades of experimentation have softened the impact of Taylor’s stark directives, control remains the legacy of the industrial-era mindset. Why?

I see two reasons. First, although we talk about control, the real issue is power. Who has power? How is power exercised? Whose voice will be heard? Are we willing to move from a mindset of power “over” to power “with”? The second reason is related to the first: a pervasive belief that people can’t be trusted to find their own solutions and that it is the role of management to supervise and problem-solve.

But what if we believe that people are naturally capable and collaborative? What if we fully grasp the benefits of enabling informal networks and self-organization in our workplaces? We need to commit to a more compelling vision for the 21st-century organization. In their book Leadership for

the Common Good (2005), Crosby and Bryson describe the “shared-power organization,” in which sharing power “is a fortunate, rather than unfortunate, necessity because it ensures that diverse voices and needs receive attention, and that implementation of solutions is more likely to succeed” (p. xxiii). Although their focus is primarily on public organizations, their concept of “a revitalized citizenship” within a democratic and interconnected enterprise speaks to “people’s yearnings for empowerment” across all organizations (p. 31).

All of this brings us back to planning. In a shared-power world, planning is still vital but serves a more noble purpose, generating what Stephen Blum calls the “organization of hope” (cited in Crosby & Bryson, 2005, p. xx). As we let go of the industrial mindset, as we enable our self-organizing capabilities, we may well discover new hope and the will to make that hope a reality.