Too Tired to Care?

Compassion fatigue. We’ve known for years that overexposure to trauma can produce hopelessness and cynicism in caregivers, educators, and first responders. In 2012, journalist Nicholas Kristof extended this notion to the broader public, saying that relentless images of suffering and tragedy can be overwhelming, shutting down our ability to care.

Kristof’s argument is supported by social psychology and neurology, but I don’t need science to validate the phenomenon. Like many others, I often feel exhausted and numbed by the constant stream of disturbing news from around the globe.

Not surprisingly, we find compassion fatigue in our workplaces too. Even though evidence is mounting that compassion is highly correlated with employee engagement (Shuck, 2015), our

organizations struggle with toxic behaviors, relegating empathy and other “emotional intelligences” to the “soft-skills category.” No wonder “70% of American workers are ‘not engaged’ or ‘actively disengaged'” (Gallup, 2014, p. 12).

Rationally, we know this doesn’t make sense. We know that a world without civility and compassion is more likely to produce anger and violence. And yet the ability to care about others beyond our immediate circle of family and friends seems inordinately difficult.

Searching for Insights: The Axial Age

Over the last decade, a number of researchers have turned to the past to understand the evolution of human thought. Their focus: the era between 800 and 200 BCE, a period in history that German philosopher Karl Jaspers (1953) called the “Axial Age” because of its pivotal role in the development of human spirituality.

Jaspers was intrigued by the emergence of similar intellectual movements across four regions of the world: China, India, Israel, and Greece. He was struck by both the number of luminaries who lived during that time, including Confucius, the Buddha, Hebrew prophets, and Socrates, and the fact that they apparently were unaware of one another’s existence. It seems the world’s great spiritual traditions — Confucianism, Hinduism, Buddhism, and the Abrahamic religions — evolved simultaneously . . . and in total isolation from one another.

How did this happen? And why?

Two authors, anthropologist David Graeber and religious historian Karen Armstrong, give us answers to these questions.

At first glance, both agree that the Axial Age is a strange place to look for guidance. It was an exceedingly violent and ugly time. All of these societies were engaged in ongoing brutal 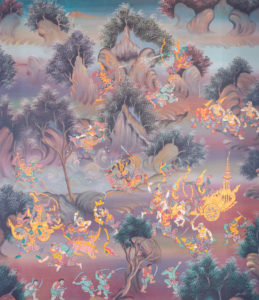 warfare. Slavery was rampant; people were hostile to outsiders; and these cultures had no regard for women.

And yet, as Graeber says, this was also “the first period in history when humans applied principles of reasoned inquiry to the great questions of human existence.” In fact, Axial sages wrestled with just about every question about the nature of the cosmos and humanity that has “remained the stuff of philosophical debate ever since” (2014, p. 224).

In explanation, Graeber offers a provocative theory: What was new in this era, he argues, was not war itself, but the widespread nature of warfare, which required the different societies to hire mercenary soldiers. The need to pay for professional soldiers had several consequences. Up to this point, economic exchanges had always taken place between neighbors, within the complex web of human relationships. Now, for the first time, set against a background of war, trade became an impersonal exchange between strangers.

Over time, as impersonal markets expanded, Axial cultures became more individualistic and materialistic. By this Graeber means they began to think differently about what motivates human beings. They began to apply concepts like profit, believing “that this is what people are really pursuing” (p. 239). In fact, he argues, Axial societies were the first to imagine “the accumulation of material wealth” as “the ultimate end of human existence” (p. 248).

The key point, according to Graeber, is that the great spiritual traditions emerged in

opposition to these materialistic notions that were inextricably bound to the violence and “mercenary logic of Axial Age warfare” (p. 248). The result: Every Axial society produced social movements, led by philosophers, that rejected materialism in favor of a conscious inner life, and violence in favor of compassion and empathy.

In her 2007 book, The Great Transformation: The Beginning of Our Religious Traditions, Karen Armstrong reflects on our current global “predicament,” wondering why “we seem to lack the wisdom to hold our aggression in check and keep it within safe and appropriate bounds” (p. xv). Like Graeber, she sees parallels with the Axial Age and draws inspiration from the fact that the brutality of the era was a catalyst for some of the most noble and enduring ideas about human existence.

Armstrong argues that two insights are embedded in each Axial tradition: that “suffering is an inescapable fact of life” and that other people’s suffering is as important as our own (p. 473). This respect for the “sacred rights of all beings” was their religion, she says, and led each tradition to devise a “spiritual technology” — meditation is an example — to provide a path toward greater mindfulness and purposeful action (p. 466).

Core to Axial spirituality was a deep and abiding belief in the power of compassion. However, Armstrong notes, the Axial sages would have scoffed at our current notion that compassion is a soft skill. “We must continually remind ourselves,” she says, “that the Axial sages developed their compassionate ethic in horrible and terrifying circumstances. [These] were not utopian dreamers, but practical” people convinced that “empathy . . . actually worked” (p. 474).

How is compassion practical? According to Armstrong, the Axial sages shared a vision of spirituality that was strikingly different from our understanding of spirituality today. They had no interest in ideology, in abstract beliefs. Instead they believed that pragmatic action and personal responsibility were more important than dogma. What mattered most wasn’t what you thought or felt, but how you behaved.

Over the centuries, this practical wisdom has been handed down to us as the Golden Rule, a universal principle embraced by almost every secular and religious tradition: Do unto others as you would have them do unto you.

Let’s take a closer look at today’s “business case” for compassion. For this I turn to the work of Sharon Salzberg and Robert Thurman (2013), who draw on ancient wisdom, modern-day Buddhist psychology, and neuroscience to better understand the mechanisms of the mind.

According to Salzberg and Thurman, it all starts with a willingness to deal with reality. Echoing the Axial sages, this means confronting the inevitable truth: Sooner or later, we will be harmed and there will be suffering. When we feel pain, our natural reaction is to identify and feel victimized by the “enemy,” the person or situation that has harmed us. However, by focusing on this outer enemy, we fail to recognize the powerful host of inner enemies — emotions like anger, hatred, jealousy, and revenge — that are more often the real sources of our suffering.

Of these emotions, anger is the most self-destructive. Here’s how it works:

According to Salzberg and Thurman, we can convert destructive energy into well-being by learning to experience compassion for others. In effect, by gaining awareness of our emotional triggers and recognizing our enemy’s own pain and emotional addictions, it’s possible to rise above anger and find more rational ways to mitigate pain.

No doormats here, though. At times we have to defend ourselves, possibly with force. But, as Salzberg and Thurman say, force has “a different impact without the sting of hate” (2015). Ultimately we can achieve our goals without engaging the inner enemies that sap our energies and detract from our happiness. Compassion is practical, they argue, because it eases suffering, our own and that of others.

The Ultimate Tip: When in Doubt, Try Patience

To recap: The idea of compassion was honed over centuries as a rational response to the violence associated with the accumulation of power and wealth. The lesson: Why waste energy and cause ourselves suffering by succumbing to the addictive powers of anger and hate? Compassion and respect are more practical responses that increase personal happiness and reduce social conflict.

Of course, the reality is that we’re human. I confess I’m not a sage or a saint. Although I embrace compassion, I can falter when confronted by a specific person or a specific situation. For

this, Salzberg and Thurman offer a final bit of advice: There is a middle way between hate and compassion, a response they call patience. To be patient means to hold a larger view of life knowing that we will survive, and even thrive, despite life’s ups and downs. We may not experience love, but neither are we consumed by hate. And by mastering our inner enemies, we temper our response to circumstances.

Kristof, N. (2012, February 9). Journalism and compassion. On Being podcast. Retrieved from http://www.onbeing.org/program/journalism-and-compassion/114

Salzberg, S., & Thurman, R. (2015, January 1). Embracing our enemies and our suffering. On Being podcast. Retrieved from http://www.onbeing.org/program/embracing-our-enemies/6034