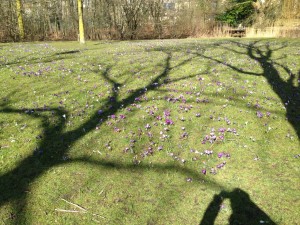 Many years ago, I had an experience that changed my relationship with fear. At the time I was a new trainer in a corporate university, learning how to facilitate one of the company’s flagship leadership programs. I had just completed the second of three days of teaching and it was going pretty well, but it was a daunting task to keep track of all the logistics and also facilitate a learning process that helped participants achieve new insights and knowledge. Not to mention the fact that standing all day in front of 25 people who expect you to know what you’re doing can be a very scary experience. Plus I was being observed and evaluated by an external “master” trainer to be sure I was competent and presenting the material correctly.

That night I had a dream. I was standing on the edge of a sandy beach with my son, who was still a small child. It was a sunny day – the sky was blue and we were looking across the water at a beautiful lake. Suddenly I saw a storm cloud form on the other side of the lake and as I watched it grew in size and darkened in color. In the dream, I realized that the storm was going to move quickly in our direction and I picked up my son, turned around, and started to run back across the sand. Even as I did this, I knew that the clouds were moving too fast and would overtake us no matter how fast I ran. I was terrified.

The storm did, in fact, reach us and the sky overhead grew quite dark and the wind blew the sand around us. And then a remarkable thing happened. When I realized I could not elude the storm, I stopped running. And then I heard a voice (my voice) say, “it’s just the fear.”  In that moment, I understood that the storm was my fear, and that my fear was not harmful and I need not run from it. And when I stopped running, the terror dissipated, and in its place I experienced a remarkable sense of calm and wellbeing.

Needless to say, the third and final day of the leadership program I led was extraordinary. Whereas I had been reasonably competent the previous two days, I was now present, convincing, insightful, and confident in ways I hadn’t been before. Was this because I was fearless? Not at all; in fact I was particularly aware of my fear. But my entire relationship with fear had shifted. Every time I started to feel anxious, I remembered what the dream had taught me – that it was “just the fear” – and the sense of calm would return. Fear felt like an acquaintance who had come along, but who was no longer competing with me. Instead of running from my fear, or trying to push it away, I carried it with me. I chose it, and by doing so, fear no longer had power over me.

I tell this story because fear is flourishing in our communities and institutions. As I write this, images of the most recent terrorist attacks in Beirut, Paris and San Bernardino are still fresh in our collective memory. The future is unpredictable and overshadowed by evil acts perpetrated by misguided groups and individuals. Although few of us in privileged positions have endured such horrors, we are nonetheless continually exposed through our ubiquitous technology to a stream of cruel and violent sensory experiences. All of which opens the door to demagogues and extremists who play on our fears and take advantage of our vulnerabilities.

Personally, I have fears I never imagined several years ago. I used to be afraid of someone breaking into my house while I’m sleeping, or a car crash, or one of my children being injured. But now I also worry about the sanity of the flight crew, the safety of the movie theater, and the potential presence of terrorists in my neighborhood.

The point, of course, is that these things rarely happen. Our brains are amazing mechanisms, but they aren’t terribly good at telling the difference between real danger and imagined fear. Real danger is when there’s an actual gun pointed at your head, or you’re teetering on the edge of a visible chasm, or you have virtually no access to food or water. One of the reasons our species has survived is because the most ancient part of our brain is wired to help us react quickly (“fight or flight”) to real dangers. In these situations, fear is pretty useful. But today, we’re bombarded with unprecedented images, messages, and experiences that feel dangerous even though there’s no actual or immediate threat to our wellbeing. As historian Karen Armstrong (2007) says, “When warfare and terror are rife in a society, this affects everything that people do. The hatred and horror infiltrate their dreams, relationships, desires, and ambitions” (p. 467). That’s when fear becomes contagious and all-encompassing and, ironically, dangerous. That’s when we need to learn to distinguish between real danger and imagined fear.

Fear resides in organizations as well as individuals because organizations are fundamentally human systems with human characteristics. In my experience, organizational fear is mostly a function of internal politics, power dynamics, finger pointing, and breakdowns in human interactions that trigger our instinct for self-protection. This is no small matter, but in the context of this discussion, these are imagined fears, not real dangers (what some might call “First World problems” as opposed to existential threats). However, organizations today also face the reality of increased volatility, competitiveness, and complexity. Add to this other recent events such as the Charlie Hebdo murders and high profile cyber-terrorist attacks and, voila, you have fertile ground for new and more virulent forms of organizational fear to emerge. Certainly, this potent mix must shatter any remaining illusions that business organizations are a safe haven from the fears of the external world. And surely we must begin to recognize – and name – fear as a key driver of mindsets, behaviors and results in any organizational context.

In the end, we know there are things over which we have no control, which may include real dangers to our physical and emotional wellbeing. But the vast majority of time, we will be facing imagined fears that are not immanent or truly harmful. In these cases, we have the opportunity to exercise other human capacities, such as our ability to reflect, learn and grow from our experiences. Whether this occurs in our waking hours or in our dreams, we have the opportunity to accept and transcend our fears, as captured in this evocative passage by Arthur Miller:

I tried to die near the war.  The same dream returned each night until I dared not go to sleep and grew quite ill.  I dreamed I had a child, and even in the dream I saw it was my life, and it was an idiot, and I ran away.  But it always crept into my lap again, clutched at my clothes.  Until I thought, if I could kiss it, whatever in it was my own, perhaps I could sleep.  And I bent to its broken face, and it was horrible…but I kissed it.  I think one must finally take one’s life in one’s arms (1964, After the Fall).